Harley-Davidson Moves Manufacturing In Response to Trade War: Was it the Right Call? 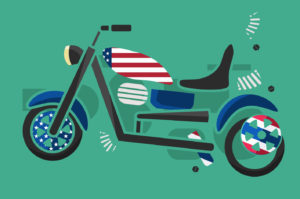 Back in March, President Trump’s administration threatened to impose steep tariffs on imported goods from some of America’s biggest trading partners. In the following months, the administration set a 25% import tax on steel and 10% on aluminum. Just as I predicted, these decisions are impacting the supply chains of American businesses, forcing them to consider the effects this kind of tumult could have on their business.

In my first blog post on the subject, I detailed a few direct and indirect consequences of a trade war caused by these tariffs. I wrote, “Indirect impact: Production and price changes will require sourcing changes. Sudden shifts that affect supply chains may impact quality and availability since some companies may encounter issues when scrambling to reduce production in some places and ramp it up in others. Operational risk assessments will help identify areas where change can have a positive or negative impact.”

Last week, Harley-Davidson, an iconic American brand, landed in the news after announcing moving some manufacturing facilities to Europe to avoid the EU’s retaliatory tariffs.

Why did Harley-Davidson Move Manufacturing Facilities?

First, the European Union became a target of some American-imposed tariffs, which affected $7.4 billion in European products. Then, the EU hit back with $3.2 billion in tariffs on US products ranging from orange juice to motorcycles.

Harley-Davidson, a leading distributor of motorcycles, said it stood to lose as much as $100 million a year after the European bloc raised its 6% tariffs on motorcycles to 31%.

The company crunched the numbers and saw these tariffs would add an extra $2,200 to the export cost of each motorcycle. In a statement, Harley-Davidson adamantly refused to pass the cost onto their consumers: “The tremendous cost increase, if passed onto its dealers and retail customers, would have an immediate and lasting detrimental impact to its business in the region.”

Europe is the company’s second-largest market behind the United States, with European consumers purchasing nearly 40,000 Harleys in 2017, compared with the 148,000 bought in the United States.

Evidently, Harley-Davidson saw Europe as too promising a market to disturb their customer base. Instead of raising costs to the consumer, they decided to move some of their manufacturing facilities to Europe in order to circumvent the added costs of tariffs.

Did Harley-Davidson Make the Right Call by Moving Manufacturing Abroad?

Looking at the facts and figures above, avoiding the tariffs by moving some facilities overseas might seem like a logical business decision. However, Harley-Davidson’s stock dropped 2.6% after they announced the move. When stocks drop, it’s a telltale sign that something went wrong, that either the decision itself or the execution of the decision went awry.

While I wasn’t in Harley Davison’s board room, experience tells me there’s a large chance the company didn’t identify and assess the reputational risks of moving their manufacturing facilities by administering a risk assessment out to their front lines.

For many companies, certainly those as large as Harley-Davidson, supply chains are vast and complicated webs. It’s understandable that no one person can foresee every consequence a trade war or a response to a trade war could have throughout a company’s supply chain. The human mind can only think one or two steps ahead, aside from great chess players. Risk assessments transform companies into the greatest chess players by anticipating risk before it manifests.

Up until this year, all bikes had been manufactured in the US with domestically sourced materials. Recently however, Harley-Davidson decided to import a few of the materials for one of their new bikes. Announcements of freshly furnished tariffs on these materials, therefore, did not bode well for this new facet of their business model. It seems to me that Harley rushed into the decision to adopt international manufacturing processes, which not only introduced new quality control risks, but severe reputational risks, as well.

After the move was announced, a common sentiment was disseminated via Twitter and other social media: Harley-Davidson is an iconic American brand. For many, it logically follows that a move outside of the US greatly contradicts and disrupts the company’s brand.

Historically, consumers and investors are intensely perturbed when iconic brands disrupt what they’ve come to know and love. Take Coke for example. In 1985, Coca-Cola was losing market share to other soft drinks like Pepsi. In an attempt to compete, the company introduced New Coke. Despite acceptance by some Coke drinkers, many more resented the change in formula and branding. As it happened, many of the dissatisfied drinkers were Southerners, who considered Coca-Cola a fundamental part of their regional identity and were not shy about making their dissatisfaction known.

Of course, companies will always keep evolving, as any company who does not innovate will get left behind. However, it’s imperative for companies to ask themselves what they risk by innovating. No one was upset by the introduction of Cherry Coke, or the advent of Harley’s Softail Cruisers. It’s when companies contradict, as opposed to build upon, their brand that they find themselves in hot water.

The beauty of enterprise risk management is it’s foundationally built on risk assessments that reach across departments and levels to account for all types of risks. In Harley-Davidson’s case, and in all those cases that land in the news, they failed to identify and address the root cause risk: the reputational risk of moving beyond the US.

Risk assessments could have helped Harley-Davidson anticipate this kind of backlash and resulting loss in market value. Risk assessments help companies ask the right kinds of questions: Who is our customer base? What do they believe in? What will this move mean to them? How will it affect their opinion of us? How large will the impact be?

The last question is key. In a complex supply chain, risk is abundant. On the one hand there’s reputational and quality control risks from sudden shifts in suppliers, facilities, and employee base. On the other hand there’s the risks of incurring too many losses from rising tariffs. All of these risks exist, but none of them are equal because they stand to impact the company differently. Risk assessments uncover the potential impact of each risk and assist the company in making the best decision for their unique situation.

From an outside perspective, I can’t say what a risk assessment would have revealed for them in terms of to move or not to move. However, I can say with confidence that had Harley-Davidson administered a comprehensive, enterprise-wide risk assessment out to and including their suppliers, they would have considered the reputational risk of their actions. They could have mitigated this risk accordingly and avoided a 2.6% drop in their market value.

This article was originally posted on LogicManager.com.