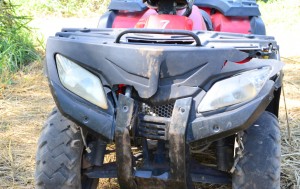 The Court of Appeal for Ontario has released a decision dealing with whether an owner of an ATV can be held vicariously liable for a driver’s negligence, even though no consent was given to operate the vehicle.  The decision is of interest because a five-member panel of the Court heard the case and overruled a previous decision of the Court.

In Fernandes v Araujo, Fernandes was seriously injured while a passenger on an ATV. The ATV was owned by Carlos Almeida and insured by Allstate. Eliana Araujo was the driver of the ATV; she had a G1 licence at the time of the accident.

Eliana and Fernandes left the property to drive over to a nearby farm on a public road without permission. While returning back from the nearby farm, the ATV rolled over and Fernandes was seriously injured.

Allstate brought two summary judgment motions. The first motion dealt with whether Allstate was liable to provide insurance coverage when the owner of the ATV did not give his consent for Eliana and Fenandes to drive it.

The second summary judgment motion asked the court to dismiss Eliana’s third party claim because she was operating the ATV without the owner’s consent and was operating the ATV contrary to Statutory Condition (4.1) of O.Reg 777/93, which states that an insured shall not operate, drive or permit another person to operate or drive a vehicle unless they are authorized by law to do so.

Allstate’s motion in the main action was dismissed and was granted in the third party action.

In the main action, the judge relied on the Court of Appeal’s decision in Finlayson v. GMAC Leasco Ltd. In Finlayson, the Court of Appeal held that vicarious liability under section 192(1) of the Highway Traffic Act is based on possession, not operation, of a vehicle, following an old line of authority (Thomson v. Bouchier). Section 192 provides:

In Finlayson, it was stated that if an owner gives possession of a vehicle to another, and the owner expressly prohibits that person from operating the vehicle, the owner is nonetheless vicariously liable for the negligent operation of that vehicle.

The motions judge had to reconcile this decision with the Court of Appeal’s decision in Newman v. Terdik. In Newman, Terdik was a tobacco owner who gave his worker permission to use the defendant’s automobile to travel down a laneway between two tobacco farms, but was expressly forbidden from driving on the highway. The worker drove on the highway where he hit the plaintiff, Newman, who sustained injuries. The Court of Appeal held that the worker did not have possession of the vehicle with consent; therefore, Terdik was not vicariously liable. The Court of Appeal found that possession is a fluid concept; it can change from rightful to wrongful possession or to possession with or without consent.

The judge found that Newman was distinguishable because Carlos did not expressly impose any restrictions on Eliana’s operation of the vehicle; he gave her possession of that vehicle. The fact that Carlos’ cousin expressly forbid Araujo from leaving the property could not be attributed to Carlos. However, the judge went further, stating that Newman may be wrongly decided, as it did not follow Thompson v. Bourchier.

Accordingly, the judge dismissed Allstate’s motion for summary judgment and found that there was consent, as Carlos gave Eliana possession of the ATV. Allstate’s motion dealing with the third party action was allowed.

The focus of the language and purpose of the provision are on the actions of the owner who is charged with the responsibility of exercising appropriate caution when giving another person possession of the vehicle.

With respect to the Newman decision, the Court noted that Newman stood for the proposition that “possession can change from rightful possession to wrongful possession, or from possession with consent to possession without consent” where the person in possession violates a condition imposed by the owner. However the Court found that this principle was inconsistent with the reasoning of the line of authority outlined in Finlayson, Thompson, and long list of other decisions.

The appeal was dismissed.

The decision in Fernandes confirms that vicarious liability is based on possession, not operation. Even if the owner expressly prohibits the driver from operating the vehicle, the owner will be found vicariously liable if they gave the driver possession of the vehicle and such possession was exercised at the time of the accident.

The decision makes sense in light of the plain wording of section 192 of the Highway Traffic Act. In Thompson, the Court held that the purpose of this provision is “to protect the public by imposing, on the owner of a motor vehicle, responsibility for the careful management of the vehicle.” Part of careful management would include taking steps to ensure that the person with whom an owner gives possession of the vehicle would not use that possession in a way that would cause danger to the public.