Eye-watering as ever the recent annual survey of executive remuneration revealed, in the words of its publisher Insurance Insider, that our leaders “are some of the best rewarded captains of industry, beating averages within commercial banking and almost on par with the petroleum industry”. Indeed the top fifty highest paid insurance bosses in 2013 pulled in an average of $10m each. Most of the fat-cats on the list seem to reside in America or Bermuda but there are plenty of CEOs doing very-nicely-thank-you on this side of the pond as well. 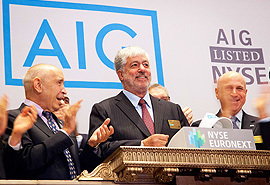 Executive compensation is nowadays tightly geared to company returns so the amounts that these guys (they are all men) earn have been substantially boosted in recent years by the bonuses generated out of their employers’ strong trading results. Not to everyone’s taste it should be added: in recent months shareholders at Endurance, WR Berkley and Hiscox have all reportedly expressed their displeasure over the generosity of their firms’ remuneration policies. As the market now enters a cyclical downturn and margins contract, we can expect even more owner scrutiny of how profits are distributed to employees.

But it is not only investors turning up the heat on the high levels of executive pay. Last month the UK Prudential Regulation and Financial Conduct Authorities issued their joint consultation paper on remuneration in the banking industry that included new rules to defer and claw back bonuses for periods of up to seven years. Strengthening the alignment of risk and reward and holding individuals to account are key cultural shifts that the regulators will be enforcing across the financial services sector, including insurance.

The implication is quite obvious. For the last decade or two, industry compensation at senior level has been driven (up) by outcomes: the more profit that companies have generated, the more their management have been rewarded. The end has been the important factor and not the means. Yet if the regulators get their way, it shall be the corporate behaviour of the executive team towards customers and other stakeholders that will have a growing influence on their pay. In other words how the profit is generated, not simply it’s amount.

In the years to come, the Insurance Insider list of highest paid executives will be an interesting chart to track. Regulators will want to see some evidence of restraint in setting pay for sure. However, they will also be keen to see only ‘good’ companies on the list and not just the most profitable ones.