Denise Garth, a Partner and Chief Digital Officer at Strategy Meets Action (SMA), leads the firm’s Innovation Practice and heads up the industry’s first Innovation Communities, a unique avenue for fostering and facilitating innovation across the insurance industry. Denise is a recognized industry leader in the innovation space. She actively tracks best practices and emerging technologies and their uses inside and outside insurance, bringing a fresh, outside-in focus to the insurance industry. Insurers and IT solution providers look to Denise for strategic thinking and insight on the importance and impact of innovation progress on the industry dynamics. Her extensive insurance experience and her strong grasp of the key challenges, issues, and opportunities facing the industry help insurers capitalize on the power of innovation to do business in more sophisticated, productive, and profitable ways. Denise can be reached at 402.963.0198 or via email at dgarth@strategymeetsaction.com
website

2015 a pivotal year for emerging technologies

The Consumer Electronics Show (CES) has been the preeminent show for seeing, hearing and feeling what is emerging and hot in consumer electronics at the beginning of each year. It is the place to go to see new electronic games, mobile devices, TVs, home appliances and other electronics that will be coming to market to amaze, excite and surprise us. Remember Onewheel, a self-balancing, one-wheeled, motorized skateboard? Occulus Rift virtual reality? The curved HDTV? Or the best in laptops, tablets and smartphones?

This 2015 CES show may just turn out to be the inflection point for the CES … where it will become the leading show of emerging technologies that should be of keen interest for businesses, especially insurance. It is the place to find new ideas and products and get a good look at potential customer excitement and interest. It may also be a place to announce partnerships using these technologies. And, this marks a pivotal point for emerging technologies: here they are real, being innovatively used, creating customer interest and demand, and positioning new market leaders. It is the year where new products will go from science fiction and future thinking to main street reality demanding strategies and plans! Move over, George Jetson, the future has arrived! (And for insurers, the future starts right now!) 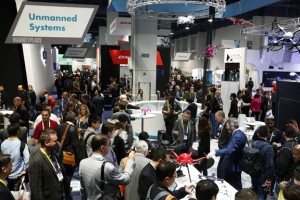 Drones and other unmanned aerial vehicles on display at the Consumer Electronics Show.

The growing proliferation of emerging technologies seen at the CES is considered by many to contain some of the greatest change agents since the introduction of the Internet, offering game-changing breakthroughs that will challenge businesses in many ways. In our 2014 research report, Emerging Technologies: Reshaping the Next-Gen Insurer, we discuss nine emerging technologies that could disrupt or transform insurance. The research found that adoption is being led by the Internet of Things (IoT) followed by wearables, artificial intelligence (AI), and drones/aerial imagery, with driverless vehicles coming up quickly behind. In fact, five of the nine technologies are projected to arrive at or go well beyond the tipping point within three years, and all nine to surpass the tipping point five years. The Consumer Electronics Show has quickly reinforced this view. Insurers that have not accepted as fact the fast-paced adoption and impact of these emerging technologies should take great pause. And here are a few reasons why.

Autonomous vehicles became one of the hottest items during the show, and even before. Audi drove their autonomous vehicle from Silicon Valley to Las Vegas, generating pre-show buzz. Kicking-off the show was Mercedes showing a concept car that looked more like a futuristic living room than a car. These and the other major automotive companies all demonstrated their acceptance, commitment, and fast-paced adoption of this new form of transportation introduced by Google Inc. just a couple of years ago. At this show, many of these automakers announced their plans to offer autonomous vehicles beginning in 2017! Note they did not make the announcement at the traditional Detroit Auto Show the following week. The future of autonomous vehicles will quickly be a reality, and so much sooner than most thought. So share the road, George J!

And then the Internet of Things (IoT) was literally everywhere, exemplified in the connected car, connected home and wearables … highlighting a fast paced market that is reinventing how we work, live and play in a connected world. Wearables with fitness and activity bands were prevalent, along with innovative devices like a pacifier that can monitor a baby’s health. Also included were wearables that were integrated with autos to enable the starting of parked cars. But it was the connected car and connected home that had the highest profiles.

The connected car was touted by many major car manufacturers. Ford, Volkswagen, GM, BMW, Toyota, Audi, Mazda, Daimler and others were showcasing their connected car capabilities and the growing array of services that come with them. The media noted that Mark Fields, Ford’s CEO, sees Ford as thinking of themselves as a mobility company rather than an automotive company, delivering a wide array of services and experiences via the auto instead of the mobile phone. Added to this are Apple’s CarPlay and Google’s Android Auto systems that mimic and integrate the functions of smartphones on the auto dashboard touchscreen. Quite a reimagination of automotive business!

All the devices and capabilities for the connected home added to the IoT momentum. Familiar tech companies like Google, Microsoft, Amazon and Apple along with traditional companies like Cisco, GE, Bosch, Samsung and others are powering ahead with new and innovative capabilities that will drive rapid adoption. In fact, Samsung Electronics CEO Boo-Keun Yoon indicated that by 2017, 90% of all Samsung hardware (TVs, ovens, refrigerators, purifiers and more) will be connected, creating a connected home personalized to your unique needs. Many of the companies also announced the development of connected home hubs to integrate these wide arrays of devices from various manufacturers and third party providers. Data from the connected home devices can be used to offer new services. The Jetson’s home is finally here!

And drones were flying everywhere to demonstrate the high interest and potential for many businesses – from phone and video purposes to building inspections, surveying, delivery, weather data gathering, traffic and much more. The Federal Aviation Administration (FAA) had a booth at the event, announcing that they expect well over 7,000 drones in use by 2018. All of this indicated that, literally, the sky seems to be the limit for drones!

What does this all mean for insurers? The event emphasized the need for insurers to take these emerging technologies seriously and to quickly begin to explore, experiment, and consider their uses in the business. Why? Because traditional competitors like Progressive and USAA made announcements at the event concerning the connected car and connected home and the potential of new competitors that are looking at how they might leverage these new technologies.

The SMA 2014 emerging technologies survey indicated that these technologies would reach a tipping point in three to five years – or from 2017 to 2019. Based on the announcements at the CES about autonomous vehicles by 2017, home hardware being 90% connected by 2017, and large numbers of drones in use by 2018, the estimated arrival time at the tipping point is right on track, or possibly even much earlier. The results? New customer demands and expectations. Decreased risk. New insurance product needs. New service revenues. New competitors. Redefined customer relationships. Reimagined businesses and industries.

The Consumer Electronics Show 2015 has foretold that 2015 will be a pivotal year for many businesses and industries, including insurance, for the experimentation, adoption and use of these emerging technologies. Change and disruption are coming. Adoption of the emerging technologies is on track or accelerating toward the tipping point. It is no longer science fiction. It is science reality. Welcome to the future … today!

Contact me at dgarth@strategymeetsaction.com if you’d like to learn how SMA can help you on the innovation journey and discover new opportunities for the insurance industry.

Denise Garth, a Partner and Chief Digital Officer at Strategy Meets Action (SMA), leads the firm’s Innovation Practice and heads up the industry’s first Innovation Communities, a unique avenue for fostering and facilitating innovation across the insurance industry. Denise is a recognized industry leader in the innovation space. She actively tracks best practices and emerging technologies and their uses inside and outside insurance, bringing a fresh, outside-in focus to the insurance industry. Insurers and IT solution providers look to Denise for strategic thinking and insight on the importance and impact of innovation progress on the industry dynamics. Her extensive insurance experience and her strong grasp of the key challenges, issues, and opportunities facing the industry help insurers capitalize on the power of innovation to do business in more sophisticated, productive, and profitable ways. Denise can be reached at 402.963.0198 or via email at dgarth@strategymeetsaction.com
All posts by Denise Garth