Cars changed the world and our cities in the 20th Century by freeing people of the limitations of their geography.  People now have the freedom to live, work, shop and travel almost anywhere they want. The car industry has caused suburbs to grow, and made the development of road and highway systems necessary. 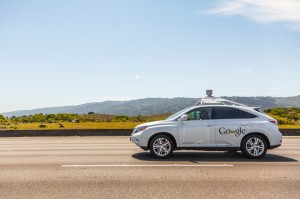 Cars also made possible the development of shopping malls, roadside businesses, supermarkets, motels and hotels, intercity travel, the taxi industry, and of course auto insurance.  Of course along with the positive contributions of cars, there have been negative implications – car accidents are a leading cause of death and injury in the world. Cars have also created traffic congestion and contributed to air and noise pollution.

As people became more dependent on cars, those without access to cars have come less independent as they struggle to live, work and shop in cities where everything is spread out over large geographic areas.  Our cities and society are about to undergo another dramatic change as we move closer to the introduction of driverless cars.

Driverless will be here soon.  Google is testing a fleet of driverless cars in the United States and Britain recently announced it will begin a trial on public roads next year.  The Ontario Ministry of Transportation is consulting on a pilot project to test driverless cars so we may soon see driverless cars on Ontario roads.  Many of the negative aspects of cars will soon vanish as robot cars will take us wherever we want with less cost, stress and risk.  Car ownership will no longer be necessary and our cities and suburbs will be transformed again.

So what will this future world look like?  It may be hard to believe but no one will own a car.

Let’s take a look at John and his family.  John steps out of the shower and after drying off picks up his smartphone and orders transportation for his family for the day.  John needs to be picked up for work at 8:15 and brought home at the end of the day.  His wife, Gloria needs a ride to work at 8:40 and on the way will drop off her two sons, Brad and Glenn, at school.  She will need a ride home at 4:30 with a stop at the supermarket.  After school Brad will need a ride to hockey practice and Glenn will be dropped off at a friend’s house.  The cars are provided by RoboTrans which operates a fleet of driverless cars that are on the road 24 hours a day.

At 8:15 John steps out of the house and a car is waiting in front.  John’s home has no garage or driveway and neither do his neighbours in this relatively new suburb which makes the neighbourhood esthetically more appealing and cheaper to build.  John reviews his presentation that he will be making this morning in the car which zips through traffic at brisk pace.  Rush hour as we know it will no longer exist.  A road full of driverless cars moves at constant speeds and distances between cars allowing the road to accommodate more volume at greater speeds.

The commute always takes 18 minutes and when the car pulls up in front of his office, John steps out and heads inside.  The trip is automatically charged to his credit card and the car pulls away and smoothly gets back into traffic to head off to pick up the next customer or to the city’s periphery where it awaits being wirelessly called back.  At the end of the month, John, Gloria and the kids have planned a driving holiday to the East Coast.  The family has already booked all the hotels and vehicles for the trip.  Not having to drive the long distance will mean that John will arrive fresh and ready to enjoy his holiday.

Downtown will look quite different with no cars parked on the streets.  For one thing, traffic will be lighter without thousands of cars circling around looking for parking spots.  There won’t be any parking lots or gas stations.  All that ugly space will be gone, which will free up commercial real estate downtown and reduce property values.  As a result living and working downtown will become cheaper.  There will still be gas stations and RoboTrans will likely own its own located in industrial neighbourhoods for refueling its fleet.  There will be no taxis on the road because RoboTrans provides the same service but without a driver and at a much lower cost.  The UPS driver will likely also disappear.

So why won’t I be owning or leasing a car in the future?  Let’s say I drive my car on average 2 hours each day.  That’s about 8% of the day.  The remaining 92% of the time it sits on my driveway or a parking lot.  If I share a vehicle with others then my cost per trip will drop significantly.  My home and property taxes will drop because my home will need a small lot when I no longer require a garage.  I also will no longer need to have a driver’s licence or learn to drive.  When I become old and infirm, it won’t be necessary to give up driving or my independence.

There will no longer be road collisions and be no need to purchase car insurance.  That complex and costly system for insuring drivers and vehicles disappears.  Most collision repair shops, towing operators and private rehabilitation providers will disappear as well.  Personal injury lawyers will see case loads fall significantly.   Just imagine a world where there are virtually no injuries and deaths from car crashes, better mobility for people who can’t drive now, more efficient use of resources, and healthier, more vibrant cities.  We will finally stop obsessing about cars and focus on people and making our cities more livable.

Just as Henry Ford revolutionized society when he introduced the Model T over a hundred years ago, Google will take us to the next frontier when driverless cars hit the road in the next few years.

2 Comments » for Driverless Cars Will Create Cities with No Parking Lots, Congestion, Collisions and No Car Insurance