Will USAA and Watson Define the Standard for Customer Service?

Some marriages are made in heaven; others are made in Las Vegas. It’s early days yet, but I think the marriage of IBM’s Watson technology with USAA’s insurance and financial services is made in customer service wonderland.  If implemented correctly (and I will tell you what I think about that), this could be the standard for others to beat. 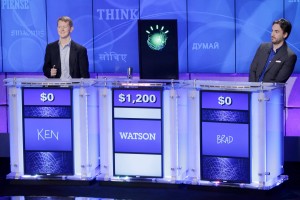 In this file photo from Jan. 13, 2011, “Jeopardy!” champions Ken Jennings, left, and Brad Rutter, right, look on as the IBM computer called “Watson” beats them to the buzzer to answer a question during a practice round of the “Jeopardy!” quiz show in Yorktown Heights, N.Y. (AP Photo/Seth Wenig, File)

USAA is not a well known player in Canada, primarily because its target market is active duty and retired US military personnel.  The company owns this market, making it the 5th largest homeowners insurer and 6th largest automobile insurer in the US.

It owns the market, primarily because it created it, and continues to nurture it through excellent service.  As the website says:

“USAA began in 1922, when 25 Army officers agreed to insure each other’s vehicles when no one else would. Today we follow the same military values our founders prized: service, loyalty, honesty and integrity.”

It has been ahead of the technology curve since at least the late 1960s when its then president declared that it must become paper-free in order to service its customers (referred to as ‘members’).  That wasn’t an easy objective, but over the next two decades, USAA persevered and became a model of how to implement document management.  I had the privileged of organizing a tour of its huge central facility in San Antonio in the early 1990s.  Attendees were impressed.

The innovation tradition continues to this day.  In 2010, MIT Sloan School did a case study on USAA’s organizational support for innovation.  One slightly geeky tidbit from that report: at the turn of this century, USAA was spending 29% of its IT budget on new projects (versus maintenance, ‘run the business’ activities).  Not great, but  not out of line.  By 2010, as a result of standardization and technology automation, the new development number was up to 50%.

Where does Watson fit in?

IBM’s supercomputer, Watson, can play Jeopardy, and win.  But it has yet to become a commercial success. earlier this year, this blog documented how IBM has been taking its investment seriously and learning from its mistakes.  There have been pilots and research initiatives.  The blog posed the question: “How far can we expect Watson and its colleagues to go over the next 3, 5, or 10 years?   What will this mean for the average insurer or broker?”

I believe the answer came in a release from USAA:  “WatsonTM, the IBM® computer … is putting its processing power toward answering questions from USAA members.”

The emphasis is on service first:  “USAA members can ask Watson questions about military separation. Eventually, members will be able to ask Watson about many of the products and services offered by the enterprise.”

I’ve had some experience working with military service personnel and their families.  Separation from service is a major life change.  As Eric Engquist, assistant vice president of Military Transitions says, the use of Watson’s cognitive computing capabilities “will enable USAA to provide relevant guidance during one of the most emotional and financially impactful decisions our military members will make during their career.”

There’s lots behind the curtain …

This will be the first commercialized consumer-facing implementation of Watson’s functionality.  The function builds on USAA’s model of on-line self-service.  According to the USAA release:  “Of the 700 million digital interactions members have with USAA each year, nearly 94 percent allow members to complete their transactions by themselves.”

A team from USAA worked with IBM for six months to train Watson how to address 2,000 questions relating to separation.  This will form the basis for the advice which will supplement personal transactions.  It will also allow USAA and IBM to learn how to train Watson further.

I think USAA does right things the right way.  They plan well, and learn from mistakes.  And they are humble in dealing with their members.  I think the relationship with Watson will be a win for all concerned, and could define the standard for cognitive computing implementation in insurance.

So, what do you think?  I’m willing to buy you a drink at the Insurance-Canada Technology Conference 2015 to compare notes.