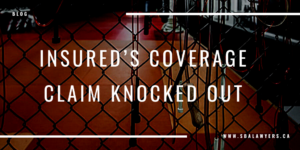 The Ontario Court of Appeal has overturned a lower decision that found an insurer owed a duty to defend an insured in a sexual assault claim, under a commercial general liability policy.

In Southside Muay Thai Academy Corp. v. Aviva, Raul Fontalvo was the co-owner and employee of Southside. PF was a minor athlete and student of the Southside kickboxing team. Southside was responsible for supervising her while she was in their care. PF claimed she was sexually assaulted by Fontalvo on May 1, 2017 while she and Fontalvo were on a return flight from Thailand after a kickboxing competition. She sued Southside and Fontalvo for damages.

In her Statement of Claim, PF made several allegations against Southside and Fontalvo arising from the May 1, 2017 incident. Among other things, she claimed:

On or about May 1, 2017, while on a flight back to Canada from Thailand, the Plaintiff was sexually assaulted by the Defendant Fontalvo, which is the subject matter of this action.

16. The Plaintiff states Southside Muay Thai Academy was negligent in its failure to supervise the Plaintiff, ensure she was safe while on their premises and under their care and control, in particular on the flight from Thailand on or about May 1, 2017.

Meanwhile, on September 7, 2018, Fontalvo was found guilty of sexual assault and sexual interference with a minor with whom he was in a position of trust and authority. The convictions arose from the incident on May 1, 2017.

Southside was insured with Aviva under a CGL policy. The policy provided indemnity for “sums that the insured becomes legally obligated to pay as “compensatory damages” because of “bodily injury” or “property damage” to which this insurance applies.” It also contained the following exclusions:

This insurance does not apply to:

a.      Claims or “actions” arising directly or indirectly from “abuse” committed or alleged to have been committed by an insured, including the transmission of disease arising out of any act of “abuse”.

b.      Claims or “actions” based on your practices of “employee” hiring, acceptance of “volunteer workers” or supervision or retention of any person alleged to have committed “abuse”.

c.      Claims or “actions” alleging knowledge by an insured of, or failure to report, the alleged “abuse” to the appropriate authority(ies).

Although the claims against Southside fell under the basic coverage for bodily injury, Aviva relied on the abuse exclusions to deny coverage to Southside for PF’s claims.

Southside brought a court application against Aviva for coverage under the policy. It focussed, among other things, on paragraph 16 of the Statement of Claim and, in particular, the allegations that that Southside “was negligent in its failure to supervise the Plaintiff, ensure she was safe while on their premises and under their care and control….” It argued the paragraph was broad enough to trigger coverage under the policy because it could apply to situations not arising directly or indirectly from the alleged abuse on May 1, 2017. The application judge agreed with Southside on that argument and found Aviva had a duty to defend. Of note, the application judge also applied contra proferentem in finding that the allegation in paragraph 16 was not caught by the exclusion.

The Court of Appeal disagreed with the application judge’s interpretation of the exclusions. It stated the issues, as follows:

The question is whether the Statement of Claim makes any (a) claim other than the claim arising from the sexual abuse and if so, (b) whether that claim(s) is covered by the policy.

Looking at the Statement of Claim, the Court found that the subject matter of the claim, including the damages claimed, was the sexual abuse that occurred on May 1, 2017. The Court held:

Therefore, while we agree with the Application judge that coverage is to be interpreted broadly and exclusion clauses narrowly, there is no claim for damages resulting from Southside’s negligence other than the claim arising from the subject matter of this action, that is, the May 1, 2017 incident.

Since there is no claim or action in the Statement of Claim other than the claim arising from the sexual abuse that took place on May 1, 2017, which is excluded from coverage under the policy, there is no need to assess whether those claims would be covered by the policy.

The Court also found that the wording of the abuse exclusions was clear and unambiguous, so there was no reason to invoke the concept of contra proferentum to the exclusion clause. Accordingly, there was no coverage for this claim under the policy.

This relatively short decision provides a useful guide to interpret duty to defend disputes. Look at the Statement of Claim. Although a claim might properly fall within a broad coverage provision in the policy, a clear and unambiguous exclusion clause should negate coverage for claims that are not intended to be covered.