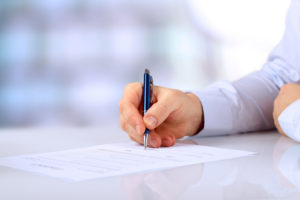 The Ontario Court of Appeal has released an interesting (from an insurance perspective) decision on whether an insurer’s failure to use a prescribed form invalidates an otherwise proper agreement between an insurer and insured.

In Royal & Sun Alliance v. Intact,  Diane Wilson and her husband met with her insurance broker on because her driver’s licence had been suspended for unpaid fines and the insurance on the vehicle she owned was being cancelled. She wished to maintain insurance coverage on the car so her husband could drive it. Insurance was arranged with Intact, on the basis that Wilson would be an excluded driver. Wilson executed an Excluded Driver Endorsement.

The trial judge found that when Wilson completed the form, the broker explained to her and she clearly understood that, even if the licence were to be reinstated, Intact still would not insure her and the Excluded Driver Endorsement would continue to apply.

Her licence was eventually reinstated, she drove the vehicle, and had an accident in which Rita and Cathy MacLeod were injured. The MacLeods commenced a personal injury action against Wilson. They also claimed against their own insurer, RSA, for uninsured/underinsured coverage under their policy.

RSA brought an application seeking a declaration that there was coverage under the Intact policy because Intact had failed to use a prescribed form, contrary to section 227 (1) of the Insurance Act, which states:

227.(1) An insurer shall not use a form of any of the following documents in respect of automobile insurance unless the form has been approved by the Superintendent:

RSA argued that the Excluded Driver Endorsement that Intact had used was invalid and, accordingly, Wilson was not an “excluded driver” at the time of the accident.

The issue before the trial judge and the Court of Appeal was whether an auto policy endorsement that excludes coverage for a named driver is valid even though it is not in a prescribed form. In other words, the question was whether section 227 (1) of the Insurance Act renders void an unapproved form.

Turning to the objectives of the auto insurance regime and the statutory setting of section 227 of the Act, writing for a unanimous court, Juriansz J.A. held:

The regulatory scheme focuses directly on the “use of a document in place of a form approved for use by the Superintendent” and gives the Superintendent the power to deal with the consequences of a deviation. I draw from reading s. 227(1) in this context that the legislature did not intend for the courts, while engaged in adjudicating a contractual dispute, to consider a contractual provision void merely because its form fails to strictly comply with s. 227(1) of the Insurance Act. The court’s function is to determine the contractual dispute, and any alleged breach of s. 227(1) is a matter for the Superintendent. In fulfilling its function, the court may well consider an alleged deviation from a pre-approved form to the extent that is relevant to its enforceability in contract.

The Court of Appeal concluded that a violation of section 227 (1) of the Act did not invalidate an otherwise binding agreement between the insurer and the insured.

This decision could impact many cases where auto insurers are being held liable for coverage solely because they failed to use the wrong forms in their transactions with insureds.

Who am I? The Case of the Named Insured and the Owner