Christian Bieck is the global leader of the insurance practice for the IBM Institute for Business Value, a research organization dedicated to providing high quality thought leadership based on primary data and real life case studies. Christian has been working in the insurance industry since 1993, as researcher, consultant, project manager and even selling insurance...

Looking into the Crystal Ball 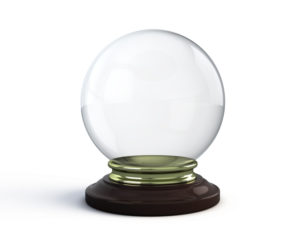 Are you interested in knowing the future? I certainly would – the more accurate, the better. (Next week’s winning lottery numbers, anyone?)

Unfortunately, as the old Danish proverb goes, “Prediction is very difficult, especially about the future.” My colleague Mark McLaughlin and I gave it a shot anyhow, and you can now read the result in our latest IBM Institute for Business Value study “Insurance 2025 – Reducing risk in an uncertain future”.

In this study, we start with two technological trends, which we think will strongly impact the future across industries: cognitive computing, and decentralization of decision making.

From there we describe four alternative future scenarios with different views of risk and insurance needs – swarm economy, central intelligence, Internet of Everything and survival of the fastest.

In swarm economy, for example, cognitive systems are ubiquitous and treated as utilities, with decision making “on the edge” in smart devices. What does such a scenario mean for insurers? Well, when risk can not only be measured but also mitigated or prevented on the edge, classical insurance might well become as good as obsolete. Insurance will switch to microproducts offering remediation and repair.

On the other end of the spectrum, survival of the fastest, cognitive is proprietary, and edge computing hasn’t gained hold, be it because of (privacy) regulation, customer sentiment or technological difficulties. (Think lack of standards.) This is where we are today, but with a twist: technology, especially cognitive, will have advanced in such a way that early adopters – “the fastest” of the scenario name – will have gained huge competitive advantage.

While insurers would probably prefer the latter scenario, as it has the potentially highest profit, competitive pressure might well move the industry toward the former – creating a real prisoners’ dilemma.

What will it be? We don’t know, but we have a few ideas of what insurers can do to be prepared:

Did I pique your interest? If yes, please download the study at http://ibm.biz/insurance2025

Christian Bieck is the global leader of the insurance practice for the IBM Institute for Business Value, a research organization dedicated to providing high quality thought leadership based on primary data and real life case studies. Christian has been working in the insurance industry since 1993, as researcher, consultant, project manager and even selling insurance...
All posts by Christian Bieck

Insurtechs – friend or foe of insurers?