New Work: Stairway to Heaven or Race to the Bottom? 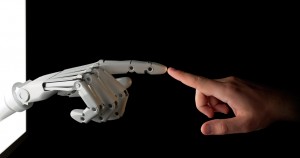 Back in June, I confessed that, as a technology professional, I had been ‘economical’ with the truth about the impact new technology would have on employees. Some analysts suggest we are finding a path to a better future, but others see a slippery slope to an unpleasantly warmer place. I’d appreciate your thoughts.

Responding to doomsayers, Forrester’s J.P. Gownder published a report, The Future of Jobs, 2025: Working Side by Side with Robots, which suggests “the future of jobs overall isn’t nearly as gloomy as many prognosticators believe.”

Gownder agrees there will be jobs shed, but “the largest effect will be job transformation: Humans will find themselves working side by side with robots…. to make sure these technologies don’t merely cut costs but drive customer value.”

This tracks with the Accenture Technology Vision for Insurance 2015, reviewed at TheIntersection  earlier this year. Accenture saw the role of employees moving from production work to a mentoring role for the increasingly intelligent machines.

One by-product of employee displacement is the rise of self-employed individuals, who take their skills to the open market as independents. There have been professions – technology, scientific, instructional – that have relied on the contract model for decades.

What seems different now is the number of self-employed individuals, across many job categories,  who are emerging after rationalization of enterprises large and small. Data suggest that self-employment rises as unemployment in the larger sector increases.

That said, there are significant benefits to self employment. Dave Ashton, founder of SnapCar, a limo service similar to Uber, recently wrote in LinkedIn on the “Case against Full-Time Employees”, arguing that the contractor (Ashton refers to as “gig-worker”), the employer, and the consumer benefit.

The benefits for the employer and gig-taker are straightforward. Employers benefit financially (only paying for utilization) and from agility (ability to scale quickly). The gig-taker also benefits financially (lower taxes) and the flexibility to take jobs that she wants and have multiple jobs on the go.

The logic around the consumer benefits is interesting. It seems to be a raise in the standard of living. Referring to limo services, hotel rooms, maids, and chefs, Ashton says, these kinds of services, which in many cases were previously price-inaccessible to all but the wealthy, are now consumed by a much larger set of people around the world because the resources that supply those services can be federated across a broader demand market.

… Until you become ‘artificial’ artificial intelligence

Writing in the Globe and Mail, Leah Eichler argues that while the benefits of cost control (for the employer) and  flexibility (for all) are correct, “on-demand” (Ms. Eichler’s term) work has a deep dark-side.

The workforce is large, young and educated. According to Eichler, in Ontario, 41 % of work is done outside the traditional full-time, employer environment. In the US, the majority are “predominantly white, male and between the ages of 18 and 34 … with almost 30 per cent possessing a college degree.”

Eichler finds that there is high risk for exploitation and arbitrary exercise of suspension or dismissal. The work does not serve as a transition to a larger role. Eichler quotes Kristy Milland, who stays at home and works (up to 17 hours per day), “We are sold as ‘artificial’ artificial intelligence, not live humans with skills and intelligence, and that hurts our chance of ever being respected as a talented, high-quality work force deserving of respect.”

Eichler’s take: “Increasingly devaluing work done by humans helps some companies in the short term, but none of us in the long term, and without taking precautions, we run the risk of racing to the bottom.”

Are we putting track shoes on for the race to the bottom?

For the insurance industry, we all know how much we can benefit from proper automation to reduce friction costs. And we see the capability of intelligent machines and big data to improve the quality of line functions. My question here is, what trade offs are we willing to accept?  And how do we know where the line is?

The Two-edge Sword of Technology: Disrupting the Disruptors

Too Good to Be True? Life in the Gig Economy

1 Comment » for New Work: Stairway to Heaven or Race to the Bottom?