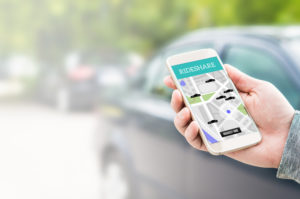 Does Uber’s fleet policy with Intact provide primary accident benefits coverage to passengers who do not have their own auto insurance policies? The first arbitration decision on this issue says “yes”.

In July 2016, FSCO approved a new standard fleet auto policy to provide primary coverage for private passenger vehicles engaged in “ridesharing” activities with a “transportation network company” or TNC. Intact Insurance then issued the fleet policy to Uber and Rasier Operations B.V., which contracts with individual “rideshare drivers” who use their own automobiles for Uber.

The policy was created to address a coverage gap in the standard OAP 1 auto policy in Ontario. Section 1.8.1 of the OAP 1 excludes coverage if the vehicle is being used to carry paying passengers. This meant that every time an Uber driver was operating a vehicle and engaged in Uber activities, he or she was violating the OAP 1 and driving without full coverage.

The policy purports to fill the coverage gap in the OAP 1 by eliminating the exclusion for “carrying paid passengers” noted in Section 1.8.1. Section 2 of the Endorsement under the policy (IPCF-6TN), specifies that the policy provides “primary coverage” for the automobile while it is being used for ridesharing purposes: 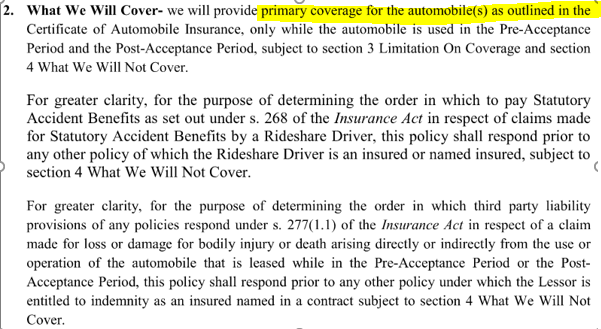 Subsection 268(2) of the Insurance Act sets out a priority scheme for determining which insurer is responsible for paying a claimant statutory accident benefits after an automobile accident:

After Intact’s “Uber policy” was released, there was never any doubt that an Uber driver injured in an accident while driving for Uber would have recourse first against Intact, under the Uber policy, pursuant to section 2 of the Endorsement. There was also no question that a passenger who happened to have their own auto policy would have recourse against that policy for their accident benefits, pursuant to section 268 (2) of the Act.

However, Intact started taking the position that its policy did not provide “primary coverage” to passengers. Intact asserted that the second paragraph in section 2 of the Endorsement specifies that “for greater clarity…” Intact would be primary over any other policy insuring the rideshare driver. According to Intact, it followed that the policy was primary only with respect to the driver’s claims and not the passenger’s claims.

Intact also argued that any Uber vehicle was insured by two insurers at the time of an accident: The underlying insurer of the vehicle and Intact. Therefore, Intact asserted that passengers, who did not have their own policies, at the very least, would have coverage under both policies.

In Northbridge v. Intact, the claimant passenger was involved in an accident while he was using an Uber to get from Point A to Point B. He applied to Northbridge for accident benefits, seeking recourse against the (underlying) insurer of the vehicle he was in. Northbridge then pursued a priority dispute against Intact, who took the position that it was not the primary payor of the passenger’s benefits.

Arbitrator Vance Cooper sided with Northbridge, finding that the wording in the Endorsement was clear, unequivocal, and unambiguous that the policy was primary for all accident benefits claims arising from passengers who did not have their own insurance:

However, the grant of coverage set out in Section 2. of IPCF 6TN – Coverage for Ridesharing Endorsement, goes further. It clearly, unequivocally and without ambiguity specifies that Intact, as the ridesharing insurer, provides primary coverage for the automobile only while the automobile is used in the pre-acceptance period and the post­acceptance period. While Section 2 provides “greater clarity” for purposes of the rideshare driver’s accident benefits coverage and the priority of third party liability coverage, this does not limit the grant of coverage specified in Section 2.

I am satisfied, on a plain reading of IPCF 6TN – Coverage for Ridesharing Endorsement, that Intact provides primary coverage for statutory accident benefits in relation to the claim of Romello B., being an occupant in the rideshare vehicle during the post­acceptance period and by reason of Ramella B. having no access to any other policy of insurance (apart from the Northbridge policy).

Arbitrator Cooper also disagreed with Intact that the passenger could choose as between Intact and Northbridge. He held that Intact’s argument ignored the clear and unambiguous wording in the Endorsement, since it specifies that Intact is primary.

In my “humble” opinion, Arbitrator Cooper’s decision is right on the mark. Not only does it pay homage to the clear wording in the policy; it is consistent with the primary purpose of the policy, which is to fill the coverage gap in auto insurance during Uber activities. It also protects underlying insurers from paying benefits arising from risks they never intended to cover.

We expect Intact will appeal Arbitrator Cooper’s decision. In the interim, the Northbridge decision is a huge victory for underlying insurers, especially for those who not have any appetite for Uber risks.

The Uber Coverage Debate appears to be far from resolved.

UberX Coverage Appears to be Intact