ATVs, Automobiles, and Jurisdictions (Oh My!) 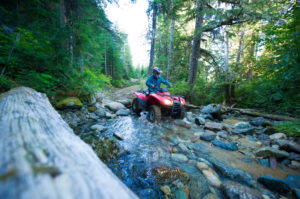 Does an ATV become an “automobile” under Ontario insurance law if it is involved in an accident outside Ontario?

In Benson v. Belair, an Ontario resident fell off the back of an All-Terrain Vehicle (ATV) in Fort Nelson, British Columbia. He sustained a severe traumatic brain injury. The ATV, owned and operated by a BC resident, was not required to be insured under an automobile policy in BC and it was not insured.

Because of the incident, the claimant applied to his automobile insurer for Ontario accident benefits, claiming recourse against his personal policy. The insurer denied the claim on the basis that the ATV was not an “automobile” and, accordingly, there was no coverage under the policy.

What is an Automobile?

(b) a vehicle prescribed by regulation to be an automobile; (“automobile”)

If it is, it is an automobile.

If it isn’t, the second question is whether the vehicle is defined as an automobile in the wording of the insurance policy.

If it is, it is an automobile.

If it isn’t, the third question is whether the vehicle falls within any enlarged definition of “automobile” in any relevant statute?

Section 15 of the Off-Road Vehicles Act requires all “off-road vehicles”, such as an all-terrain vehicle, dune buggy, or dirt bike, to be insured under an automobile policy when they are being operated on land that is not occupied by the owner of the vehicle. Accordingly, whether a particular off-road vehicle needs to be insured under an auto policy almost always depends on where the vehicle is operated at the time of an incident.

In other words, an off-road vehicle operated in Ontario is always required to be insured under a motor vehicle liability policy unless it is being driven on land that is occupied by the owner of the vehicle. This means that a land occupier can use her off-road vehicle without insurance as much as she wants on her own land. But once she decides to ride the vehicle on someone else’s land (public or private land), it must be insured under an auto policy. And once the vehicle is required to be insured, it becomes an “automobile”.

Many jurisdictions outside Ontario, such as BC, do not require ATVs to be insured under automobile policies.

In Benson, the claimant argued that the phrase “any Act” in the s. 224 definition of “automobile” meant any “Ontario” Act. There was no question in Benson that if the accident happened in Ontario, section 15 of the ORVA would have required the ATV to be insured at the time of the incident, because it was being operated on public lands (land not occupied by the owner of the ATV). This was the basis of the claimant’s argument against Belair.

However, the accident did not happen in Ontario.

Therefore, the big question in Benson was whether the ATV in BC was an “automobile” under section 224 (1) of Ontario’s Insurance Act because of section 15 of the ORVA. Put another way, do the provisions of the ORVA apply to a vehicle being operated in BC?

Director’s Delegate Evans agreed with the arbitrator and dismissed the appeal. The delegate held that the territoriality principle (from conflict of laws jurisprudence) provides that Ontario’s law on what motor vehicles must be insured has no binding effect in British Columbia.

This case requires an adjudicator, considering whether a vehicle falls within any enlarged definition of “automobile” in any relevant statute, to focus on the laws of the jurisdiction where the incident occurred. An automobile in Ontario might not be an automobile in a foreign jurisdiction.

Trip and Fall? Better Land on a Car