As Managing Editor, Jameson Berkow leads all content production for RATESDOTCA Group (formerly Kanetix Ltd.) and serves as the public face of Canada’s largest comparison shopping service for insurance and financial products. Over nearly two decades in financial journalism, Jameson has held senior reporting roles with the Financial Post, BNN Bloomberg and The Globe and Mail. He appears regularly on various media outlets to advocate for greater financial literacy and is a member of the Society for Advancing Business Editing and Writing.

The battle over connected car data has arrived. Insurers are not prepared. 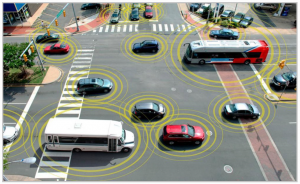 Passenger vehicles are producing unprecedented amounts of data as more and more ‘connected cars’ hit the road. Whoever controls that data could be destined to control the future of auto insurance as well.

Canadian insurers have been looking to profit off of so-called ‘telematics’ data since at least 2014 when telematics data collection was in its infancy and largely relegated to the rental car industry. Seven years later, Teresa Scassa says “what we are heading into now is just a completely different universe” in terms of the sheer volume of data being amassed.

We are witnessing the “start of a battle over connected car data”, she says, and it looks like insurers are far from any position to win.

“I don’t think insurance companies have access to that data yet, but I’m sure they want it and are looking for ways in which they can get it,” Dr. Scassa, Canada Research Chair in Information Law and Policy at the University of Ottawa, told me in a recent interview. The default right now is that whoever collects the data owns the data, which means vehicle manufacturers currently hold all the cards.

The Insurance Bureau of Canada, meanwhile, says it supports “a data-sharing agreement with vehicle manufacturers, vehicle owners and insurers where vehicle manufacturers would have to release prescribed data in order to facilitate a claim,” according to a written statement from IBC general counsel Mario Fiorino.

“The use of driving behaviour information for the purposes of determining risk and corresponding premiums benefits both individual insureds as well as the general public by encouraging safe and responsible driving,” Mr. Fiorino said.

Trouble is, the latest research suggests insurers wouldn’t know how to handle more data even if they were granted the access they seek. IBM published a report in March 2021 titled “Personalization, platforms and data-designed offerings” that found 71% of insurers have data-centric products such as usage-based insurance or voluntary telematics apps, but only 45% are actually collecting and analyzing data in real time. The rest are relying on third parties.

Another report, also from March 2021 and published by the Council of Canadian Academies, warned insurers are likely to fall even further behind in the coming years.

Connected car technology development “will outpace product liability and insurance laws and regulations in the next ten years,” the report said, adding that trend “may eventually cause the consolidation of insurance companies, and new, non-traditional competitors may enter and disrupt the industry.”

That is already happening as carmakers seek to monetize their increasingly vast data troves. General Motors launched OnStar Insurance in November 2020 and Tesla Motors launched its own insurance product in 2019 with major market expansions in recent months.

Data-focused products are also making rapid gains in popularity as the coronavirus pandemic has drastically altered common driving patterns like the daily commute. CAA’s MyPace product, a usage-based policy that charges its premiums based on 1,000km increments, saw a 300% increase in adoption between April and December 2020 versus the same period in 2019.

Insurance providers, for their part, have long assured customers that saving money is the only option, with the worst case scenario being their discounts are reduced or eliminated if the telematics data shows riskier behaviours. However, that too could be about to change.

The Financial Services Regulatory Authority of Ontario (FSRA) changed the rules for insurers in November 2020, allowing them to continue offering discounts to drivers with “safe” telematics data but adding the option of adding surcharges to drivers with “riskier” telematics data. Quebec and Alberta have also made recent changes to their provincial insurance regulations allowing insurers to effectively punish drivers they consider unsafe.

Providers will still need to get regulatory approval before implementing any sort of surcharges on their usage-based insurance policies, but there is reason to believe that has been the industry’s plan all along.

“If you want to truly improve driving behaviour, you have to penalize bad behaviour,” George Cooke, president of Martello Associates Consulting, told Canadian Underwriter in early 2014. Cooke, a past CEO of The Dominion of Canada General Insurance Company, was interviewed shortly after Desjardins, The Co-operators, Intact, and CAA launched their telematics offerings in Ontario.

“With a surcharge, all of a sudden this device has economic incentives that can go both ways. You can change behaviour. That lowers the total cost. The politicians will catch on to it sooner or later, and when they do, they will force it,” Cooke said.

As Managing Editor, Jameson Berkow leads all content production for RATESDOTCA Group (formerly Kanetix Ltd.) and serves as the public face of Canada’s largest comparison shopping service for insurance and financial products. Over nearly two decades in financial journalism, Jameson has held senior reporting roles with the Financial Post, BNN Bloomberg and The Globe and Mail. He appears regularly on various media outlets to advocate for greater financial literacy and is a member of the Society for Advancing Business Editing and Writing.
All posts by Jameson Berkow

Telematics changes the dynamics of the automobile insurance industry